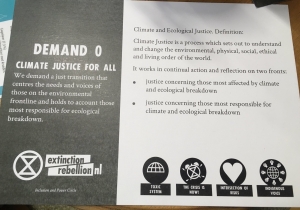 One of the topics that is important for me as a transformative social innovator is climate justice. The climate crisis is an issue I feel strongly affected by in the present, as well as in the prospect of the (near) future. Growing up in Bucharest, for example, I know about the correlation between the massive pollution in the city and increasingly more frequent respiratory problems in children born and brought up there (aerlive, 2017). Driving through the Romanian mountainside I feel deeply hurt by seeing empty patches where there were once forests – especially knowing about how much of that is not only unethical, but also illegal (Neagoe, 2019). Currently living in the Netherlands, and especially in Rotterdam, I am worried about massive floods (Miller, 2015) and what the consequences of that might, as well as genuinely afraid of experiencing such an event myself.

Apart from this, the exclusive focus on ecological damage never seemed completely right to me. For me, it could not be just about numbers and data and reports about something separate from ourselves. As I have touched more and more into this topic, I began to see its interrelation with social injustices, too. The input of what I have learned at the Performatory, as well as my involvement with societal topics outside of it – for example joining Extinction Rebellion, a climate activism movement, researching ecovillages and other forms of intentional communities in the Netherlands or working and volunteering in permaculture gardens and biodynamical farms – contributed to this. I can now better sense the complexity and, hence, the interconnectedness of ecological and social challenges.

Understanding complexity is important in the context of transformative social innovation, because it enables us to perceive problems differently. This, in turn, opens space for new approaches to analysing information, creating solutions and taking decisions. There are numerous situations that can benefit from a systemic approach. The climate crisis is one of them: the climate crisis is a complex systemic issue. On one hand, the ecosystem is a complex system. On the other hand, we, people, are also part of the ecosystem. Climate justice is an approach that respects this. It understands that ecological justice and social justice are intricately interconnected. This is referred to as intersectionality – the fact that the climate crisis is “a social and political problem, as well as an environmental one” (Climate Action, 2021).

Climate justice acknowledges the fact that the responsibility for the climate crisis and the consequences are not proportionally distributed. This means that while the responsibility lays heavier on the shoulders of some companies or countries, they are the ones who bear the lightest consequences. Instead, the communities who are already facing injustice and oppression are the ones most heavily affected by the climate crisis – “whether physical – floods, desertification, increased water scarcity and tornadoes – or political: conflict and racist borders.” (Wanjiku Kelbert, 2020)

Climate breakdown disproportionality impacts people of colour, women, LBGTQI+ people, disabled people, working class and poor people. For example, according to the United Nations Development Programme, 80% of people displaced by climate change are women, and women are more likely to die or be harmed because of extreme weather or natural disasters. (Climate Action, 2021)

That is because both social and ecological injustice are essentially rooted in the same systemic causes. As I see it, they both have to do with a narrative of separation – from ourselves, each other and the whole of nature – and consequently of oppression and exploitation. The anthropocentric view of the world – which means seeing humans as the central entity of the universe and interpreting the world in terms of human values and experiences – is dominant. Hence, it defines to a large extent the interactions and relationships that humans have with nature. It fails to see the involvement of humans in the eco-system, separating us from the rest of nature. We treat her as “ours to rule and ours to use” (Schouten, 2020).

Furthermore, this hierarchical and exploitative view is extrapolated to humans, too. Colonial history shows how some people have forcefully treated other people as less civilised, less worthy and as mere resources. Christopher Columbus has infamously written during his expeditions “The Indians are so naive and so free with their possessions that no one who has not witnessed them would believe it. When you ask for something they have, they never say, ‘no’. (…) To the contrary, they offer to share with anyone. (…) They would make fine servants. (…) with 50 men, we could subjugate them all and make them do whatever we want.”

The consequences of colonialism are still felt today – both on the oppressor as well as the oppressed. Some countries continue to enjoy the riches they have stolen and, even more, carry on growing them by continuing to subjugate nature and humans alike. Nowadays, the fossil fuel industry, for example, as well as fast fashion are two indescribably economically profitable industries, which are fundamentally built on modern slavery and depletion of natural resources. The British–Dutch energy and petro-chemical company Royal Dutch Shell is a notorious example of building modern injustice on the riches of a colonial history. It is “driven by profit maximisation, thrives on inequality and the violent exploitation of human and other living beings and systems, undermines democratic decision-making, and misleads the way to a just transition” (Sandwell, 2021).

That is why Shell must fall. Along with all the other companies and corporations that sustain modern slavery and ecological abuse. And with them the whole system that keeps it in place and that has generated such injustices. There is no making them ‘greener’. They can simply not exist in a just world. Climate justice is a complex systemic problem. And therefore, it requires system change as a solution. Only changing individual elements is not enough, but we must instead look at the system as a whole and at how its interactions determine the outcomes.

Tragically, this is on a large scale not treated as a complex problem. A reductionist approach is common for climate policies. Short-term, technological solutions have been the best guesses of world leaders until now, as can be seen from the last 40-or-so years of climate agreements and conferences, which have anyways not even been respected. Climate justice, in turn, proposes something fundamentally different. It is not just about reducing emissions, but it is driven by the ethical goal of creating a fairer world in the process.

Gregory Bateson, 20th century thinker, philosopher and anthropologist is known to have said that “The major problems in the world are the result of the difference between how nature works and the way people think”.  We need to acknowledge the complexity of ecological and social justice issues; their numerous, interconnected elements interacting in non-linear and emergent ways. And we need to act accordingly, by involving diverse voices and experiences – especially including those of marginalised communities and nature – in the creation of solutions.

My involvement in climate activism has helped me better understand and face this issue. Moreover, it has determined me to act in an uncompromising way to achieve radical justice. System change is in itself a radical proposition – and I am committed to it. Being guided by this moral goal – achieving climate justice – requires constant questioning and reflection in my everyday practice. Both on a personal as well as professional level I am discovering what it means to act from and within a different system. What does it mean for me to think more aligned with the way nature works? What can I do to include the voices of marginalised communities? What can I do to help Shell fall? What does a world without such corporations look like? How can I stop exploiting nature? In which ways am I still exploiting my own body? These are ongoing question I am facing myself with every day. 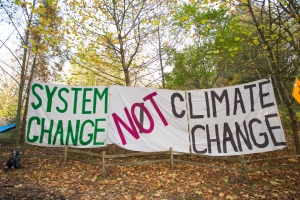 I want to also encourage you to reflect on how this topic makes you feel. Take a deep breath and pay attention to your body – your chest, your stomach, your shoulders, your hands. How are they reacting to what you have just read? What are they telling you right now? What are they asking you?

I invite you to observe the ways in which this topic touches you – in this moment and in your everyday life. What injustices do you notice in your immediate reality? How do they affect you and how do you affect them? And eventually, what would a more environmentally and socially just world look like for you?

Climate Action. (2021). What is climate justice?. Retrieved from https://climate.friendsoftheearth.uk/resources/what-climate-justice

Noman, N. (2015). A Shocking Christopher Columbus Quote Is Reminding People Why He Shouldn’t Be Celebrated. Retrieved from https://www.mic.com/articles/126611/a-shocking-christopher-columbus-quote-is-reminding-people-why-he-shouldn-t-be-celebrated