First of all, since the field of operation I am in is the Netherlands, I never realized that the Netherlands and this vision of achieving a fully circular economy by 2050 was part of a bigger whole. In 2015, the European Union adopted a Circular Economy Action Plan. This plan was a building block of the European Green Deal which is the European Union’s agenda for sustainable growth. The action plan establishes a concrete and ambitious programme of action, with measures covering the whole cycle: from production and consumption to waste management and the market for secondary raw materials and a revised legislative proposal on waste (European Commission, n.d.). Executive Vice-President for the European Green Deal, Frans Timmermans, said: “To achieve climate-neutrality by 2050, to preserve our natural environment, and to strengthen our economic competitiveness, requires a fully circular economy (Timmermans, 2019). The whole European Union, therefore, strives for a circular economy by 2050. The European Commission initiated the movement towards a circular economy in Europe in 2015, because at that time, no national action plans had been set into place by any of the individual European Union member states. Now, who is leading the way in among those member states? Which countries have replied to that call in 2015? Finland presented its roadmap last year, France has just published one, Slovenia published its own strategy in May, Italy has revealed the building blocks of its roadmap… Germany has been working on bits of a circular economy. And of course, the Dutch were advanced before the circular economy package was announced in 2015, yet it wasn’t a fully-fledged national roadmap (Iles, 2018). So, in a way, my assumption that the circular economy ambition for 2050 was set by, as Iles says ‘the Dutch’, was not that incorrect after all. In the end, you could say that multiple EU member states are developing action upon the implementation of the circular economy, all sharing the same vision that their member state should operate in a fully circular economy by the time of 2050.

Then, looking outside of Europe. You would say ‘Made in China’ cannot be left out of this story: very true. China has had a circular economy in its policy since the early 2000s. To begin it was primarily an industrial ecology agenda, looking at how the waste of one company can become resources for another. It was very much end of the pipe, the three R’s. Reduce, reuse, recycle, so therefore mainly focusing on the second principle of the Ellen MacArthur’s Foundation’s definition of the circular economy, as we have seen in blog 2: keeping products and materials in use (MacArthur, n.d.). But the latest Circular Economy Policy Portfolio, which came out in 2017, looks at eco-design (the first principle: designing out waste and pollution) and extended producer responsibility and it’s a massively important step (Iles, 2018). In addition to this, China and the EU have signed a joint Memorandum of Understanding on Circular Economy Cooperation at the 20th EU-China Summit, which means that China and the EU commit to collaboration and sharing of knowledge and best practices, they are key to unlocking these opportunities. Closer alignment on the circular economy between China and the EU is a significant step. (MacArthur, 2018). China, being a key player in terms of production in the world, making steps on policy regarding the circular economy, therefore, is promising.

Looking at the number one economy in our world, the one who therefore can also make the most impact, what about our old friend Donald Trump? If you would have to guess based on his character what US policy is around the circular economy, he would probably say: 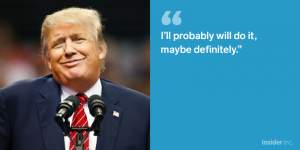 As he said when he was sharing whether he was going to put the US government on shutdown regarding the Mexican wall in 2019. Very clear, I must say. Well okay, back to the circular economy. The US does not have a clear governmental policy when it comes to the circular economy. Looking at the situation the US is in, the support for the circular economy comes from organisations on its own rather than from the government. In an effort to promote the circular economy in the US and eliminate waste, the Ellen MacArthur Foundation has launched a US chapter of its Circular Economy 100 (CE100) program. The international CE100, established in 2013, includes corporations, universities, city and government authorities, and include brands such as Google, Cisco, Coca-Cola, eBay, Apple, Novelis, IBM and others (Hardcastle, 2016). Also, these efforts focus on organisations, cities and local governments. The US has shown no national level signs to adopt a policy regarding the circular economy. This because they are in a different situation than EU countries: the unemployment rate is very low, growth is good… They have plenty of energy, they’re going to be a net exporter. They have plenty of room to landfill the unpleasant by-products of the linear economy if they want. Compared to European countries, the context is considerably different, both in terms of sheer availability of resources and of space, as well as when it comes to political priorities at federal level (Iles, 2018).

In conclusion, looking at the key players in the world: China, the US and Europe, the developments regarding the implementation of the circular economy differ. What I do find hopeful is that a country like China, does show significant steps towards making the whole economy circular. What I find beautiful to see is that the collaboration between China and the European Union shows that collaboration is the only way towards achieving the circular economy. What I see is that when it comes to the circular economy, people often focus on either one or two, out of the three principles that the circular economy consists of. What I think that a lot of people fail to understand is that it requires a tremendous amount of collaboration to achieve circularity, not only between countries on a policy level but also between companies on a lower level. I think that what I saw, companies hiding behind the policy of countries, functions as an excuse not to make a change and I think that’s a shame. It makes me wonder how to show the importance and urgency of the circular economy to organizations and how to show that they are able to make a change.

In my project, together with Studio Lauda we decided, based upon the outcomes of my research, to deviate from the topic of the circular economy and focus on how we can integrate sustainability, so a broader concept than circularity, in Studio Lauda’s products and services. Taking up this route leaves me with the question of how I can create the urgency of the circular economy and how to create the belief that companies can make a change. How can I show them that we need the circular economy sooner than later and that is dependent on them, not on others? As I mentioned in my introduction, how can I let organizations see that they are more than just a drop in the ocean and that the responsibility does lie with them? Maybe there is no room for that question in my current project because we decided to take a different route, however, I think that this is very, very crucial for future purposes.

About the Author: Emma Boerekamps

Passionate about using business as a force for good. Let's make the world a better place where we spend most of our time: at work.

Emma Boerekamps
Passionate about using business as a force for good. Let's make the world a better place where we spend most of our time: at work.
Close Sliding Bar Area