Play-Fight practice: a journey of connection

In the autumn of 2019, I participated in the Movement Immersion camp organized by the Formless Arts collective. This is where I first encountered the Play-Fight practice which proved to become rather defining for my current embodiment approach. This article I wrote three years ago, thus, provides a glimpse into my journey into the topic of embodiment and the role that the Play-Fight practice and philosophy played in that, by seeing my reflections on it at the time. 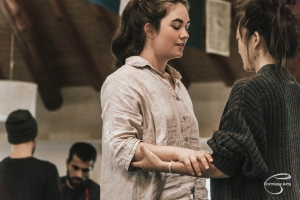 An important premises on which the practice is based is that we and our world are in a constant state of change. We are never still, but are always in search for balance. This might stir within us a feeling of insecurity. In order to feel safe, we must not strive for a static stability, but look for tranquility in the movement. By embodying this principle, adapting our bodies to it, we manage to modify the way we carry ourselves through life. At least that is what I came to see happening during the camp. I understand Play-Fight as a discipline and philosophy of movement concerned with unlocking and strengthening the potential of the mind-body connection by releasing tension, thus eliminating resistance, and accepting and using the impulses we receive. In the Play-Fight terminology, this is referred to as ‘the state of falling’. And I will continue by referring to this bundle of physical and mental principles in a general sense as ‘the fall’.

This fall also implies a state of liquidity – another principle we worked on. This means that we are capable of maintaining our essence, what defines us, while being receptive to the impulses transmitted to us. Very much like liquid, we keep our inner qualities, but are able to shift our form. Reflecting on this concept, I realized this is how I understand resilience, too. And this is a concept I am very keen on, as a transformative social innovator, because it is what makes the difference between superficial changes and true transformation.

As soon as I was able to embody the fall, I noticed changes in my most basic habits as well as my general attitude – from the way I sat on a chair to the way I interacted with others. Rationally understanding this state, and the movements and concepts it entails firstly changed my movement patterns. That, in turn, changed my thinking patterns, my perspective. Moreover, I observed changes in my physical body, as well as my emotional state and overall mental perception.

The process started for me by understanding the principles that were conveyed to us – ‘the fall’ – in an intellectual manner. I found it quite frustrating at first that I could not rightfully transmit them to my physical body. I feel the same kind of frustration when I try to draw, for example – a skill I do not exactly master. I look at my model and I clearly see the lines, the contour, the shadows, but when it is my hand’s turn to replicate them, they do not coincide, no matter how attentively I observe all the details. The same was representative for the first training sessions: I rationally understood what I had to do, but the physical outcome was not in accordance. I believe that is because, even though I was physically capable of performing the task, this communication path was not yet established between my mind and body. It required neural pathways I had yet to build. Anyway, that is why I was there. In the first stages, I could, at times, catch my body perform ‘the fall’ on its own will, but I did not know what I had done differently to make it work. Further in the process it was still not my merit when it worked, but I became more aware of the differences. By the end, I am amazed to say that I was able to consciously perform ‘the fall’, even if still with quite some difficulty.

Furthermore, the most reoccurring theme of this workshop was for me the pursuit of balance; a never-ending pursuit, but surely one worth following. First of all, I balanced between tension and release, for the most important quality we train through this practice is non-resistance. In a physical sense it refers to concepts such as releasing tension in the body or listening and following your partner without anticipating. In a philosophical sense, it is about embracing the circumstances we cannot control, and working with them, without losing ourselves in that.

This balance that non-resistance implies – between maintaining integrity without holding tension and relaxing without collapsing – is, however, quite challenging to find. It was quite revelatory to embody the difference between relaxing and collapsing, and learn how to not hold tension, but still hold integrity. This is a balance I am constantly searching for in my everyday life too, where I face difficulties or stress. In these situations, I am learning to find a relaxed focus, where I am sharp enough for the challenge at hand, without being overwhelmed by it. Both in an everyday context, as well as in a Play-Fight one, this leads to a feeling of flow.

Second of all, I balanced between attention and intention. On one hand, we need to be receptive to what is given to us beyond our control and accept it as it is. On the other hand, we need to discern when we do have the power to act, and work with those opportunities. In Play-Fight, it is about accepting the impulse of your partner and being able to actively use it. In everyday life, it is about embracing the complexity and consequent unpredictability of life, being able to listen to and move with it.

I strongly believe in the connection between our minds and bodies and in the benefits of strengthening it. Until now, I understood it theoretically and have witnessed it being stimulated, but mostly unconsciously. That is why the most revelatory insight I had during this camp is that I was able to observe and experience the influence of mind and body on each other consciously activated. I find that strengthening this connection is highly relevant for transformative social innovators, as our general mission is to shift mindsets. We cannot ignore the fact that these mindsets – our culture, our worldviews, our moral principles and values – are all strongly present in our bodies. If we want to achieve resilient transformation, we must engage integrally and act on and with our whole being. That is why I strongly believe we must actively work on consolidating the connection between our physicality and our intellect.

I find it relevant to mention that both ends of this connection must be trained towards a meeting point. If we train them without paying attention to their relation and without the intention of actively strengthening that relation, the effects are not as benefic. Think of athletes who have a great control of their physical body, but isolate it from the greater context of their being. On the other end of the spectrum, there are people with great intellectual capacities, but who ignore their physicality. Neither of them is close to their full potential, because a great part of their being is disengaged. Moreover, as they are so intricately linked, it is not possible to solely act upon one without affecting the other. However, the difficulty lies in being able to consciously employ this effect or in at least gaining awareness of its relation of causality. In addition to this, what I find crucial in this process is maintaining a state of mindfulness. And by that I mean being fully present with both our minds and our bodies. Over-thinking obstructs the process just as much as disconnecting completely from your thoughts. Only by engaging both we can facilitate the transformation.

Another significant observation is that I could relate some of the Play-Fight concepts with permaculture principles – of which I am a strong supporter. The former functions by using the impulse that is given to you, conserving its energy, and moving together with it, rather than moving against it. For example, if your partner proposes a movement to the left, you do not stop it and go to the right, but you follow it, enter its path, and from there influence its direction. In a similar fashion, permaculture is built on the idea that we should take the opportunities that nature gives us, instead of working against them. As an example, we should not farm cotton, a water intensive crop, in the dessert. It all sounds like common sense, but somewhere along the rapid technological development we have forgotten to consider that, and are no longer collaborating with nature. That is one of the reasons I enjoy the Play-Fight practice, because it helps us re-calibrate and re-learn these basic, but so needed ways of being.

The movement immersion was not only a heart-warming experience, but a fountain of transformative wisdom. It was an inspiring and versatile experience, which benefited me greatly, both in my personal as well as my professional life. From my perspective, it was very much in line with the transformation I would like to see in our society. And it has been such a joy to be fully immersed in a realization of this vision, be it just for a week. It now pleasantly lingers in my mind as a reminder of where I wish to tread towards and it has recharged my power to continue pursuing that direction.