For an Extinction Rebellion (XR) protest about a year ago, I was asked to give a speech about regenerative cultures. It was recorded through a Facebook livestream video which can be found here (first 12 minutes of the video). Below, you can also read the text I wrote.

Although it was a year ago, I feel that, in broad lines, it still reflects my view on the world. That is because I elaborate on a broader, longer-term vision, which I am still striving for. However, as time passed, I delved deeper into the topics I am covering here, learned more about them and developed more nuanced perspectives. For instance, I am now more careful with using meaning-loaded terms such as “toxic system” or “patriarchal systems of oppression”, especially in contexts where they are so commonly and almost unquestionably used as in a climate activism movement. At the same time, it is a speech for a protest, not an academic research paper, so it is also written in a more personal and somewhat more radical style, as it is meant to stir emotions.

It is representative of my own views, at the time I wrote it and currently, which overlap to a great degree to those of the movement. It is meant to express these views we are fostering in XR to the outside world. However, if I were to write a speech now for XR, I would like to see how I can challenge the people in the movement, too, rather than only reiterate our own micro-level status quo. More than this, I am personally more interested in creating dialogues, rather than monologues; in facilitating conversations, rather than telling people what I think is right. After all, what do I know? I would be interested in the dialogues this speech can start and in having my views challenged.

All in all, I still feel connected to this text and the perspectives I put forward, so I would like to keep sharing it with the world. I know a speech won’t change the world, but I would like to think it might motivate some people to do so.  If you choose to read or listen to this speech, I encourage you to question your own feelings and thoughts about the topics I am sharing. Are there phrases that catch your attention? Does something I am saying make you emotional or angry or perhaps confused? What parts can you relate to? What would you find different nuances to?  I would be very curious and happy to hear your impressions! If you would like to share this with me, please reach out to me on LinkedIn. 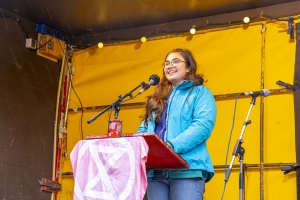 Hi, how are you feeling? Let’s first take a couple of breaths together before we start.

I’m a bit nervous to share this with you today. As well as very excited and grateful, because what I’m going to talk about is quite personal. It is my personal vision of the world that we rebel against and the world that we rebel for. It starts with the understanding that we are creating conditions that will soon make human life impossible on Earth.

Our profit-driven, patriarchal systems of oppression and exploitation are irreversibly harming nature and us humans as part of it. In the greater scheme of things, we are only a small part of nature, and have been here for just a short period in the planet’s life. And yes, the Earth has gone through climate change before. Nevertheless, it is a crisis. Because it threatens the existence of us humans and of many other species that we’re sharing this planet with.

We can continue with the way we’re doing things now – for perhaps a couple more generations. We can keep destroying the very systems that we’re part of, that nurture and nourish us, and eventually end in extinction. But that’s not the story I want to contribute to. at least out of survival instinct, I’d like to be part of creating a different story – one in which we play a positive role in the eco-system, rather than the villains we find ourselves to be now. I want to contribute to the story in which we survive and thrive, together with the rest of nature; in which our lives have a positive impact and are beneficial to all other life on Earth, too.

That requires fundamental transformation. Not just small adjustments to our current ways of working. Not just small improvements that sustain our current system. But complete system change. We need to change the way we think and move, the ways we relate to each other and organise ourselves. We need to reconsider our purpose, what drives us in life as individuals and as society. We can no longer to ‘business as usual’. And ‘doing less harm’ – which seems to be the most ambitious goal of our under-achieving politicians and green-washing corporations – is just not good enough.

If we take a closer look at the multiple systemic crises we are now facing, we notice that, fundamentally, we forgot or are ignoring that we are elements, intricately interconnected within a greater whole. On multiple levels, we are acting based on a narrative of separation. First of all, from ourselves. We are separating our minds from our bodies and our emotions. We exploit ourselves, not respecting and taking care of our limits and of our actual needs, thus seriously affecting our mental, physical and emotional well-being.

Second of all, we seem to think we are separate from each other.  We let differences of race, class, age or gender distract us from our common humanity. We feel rivalry towards people who are like us, spite for those we perceive as above us, and we discriminate and exploit those we think we are above of. Eventually, we only feel more alone and more disconnected. Last but not least, we see ourselves as separate from or even above other species and the rest of non-human nature. We shamelessly exploit it far beyond its capacity. And need I remind you of the irreversible consequences that the destruction of our environment already has? The massive loss of biodiversity, the extreme weather events? Consequences that are already heavily affecting many other species, as well as frontline communities – people who do the least harm, but who happen to be at the bottom of our unjust societal hierarchy.

That is why we need systemic transformation. And hear me when I say that a better world is possible! We have contributed to the mess we’re in now and we can contribute to unfucking the system too. We can start by asking ourselves and imagining what a better world might look like, how it might feel like. A more connected, loving, resilient world that works for everyone and for the whole of nature, now and for generations to come. In Extinction Rebellion we call that Regenerative Cultures. That is what we rebel for – with our whole bodies out on the streets, with every word we speak, with every action we make.

We are building cultures of resilience and care, in which we acknowledge our complex and intimate interdependence to the whole of life, in which we participate actively and positively in society and in nature. We are building cultures in which we act from a fundament of care – for ourselves, for our minds and bodies, for each other, respecting each other’s humanity and differences, and for the whole of nature, protecting non-human beings just as well.

In order to reclaim our role as active participants in our systems, in the whole of life, we need to engage our whole being – our bodies, our emotions, our thoughts. The current toxic system is deeply rooted within us as well – in how we think and how we move. It is deeply rooted in our struggle to be productive beyond our limits and needs, in our judgemental relationship to our bodies, in our repression of our emotions. Therefore, allowing ourselves to feel, to be present with our thoughts and our sensations, to observe and listen without judgement to what’s going on inside ourselves, and to tend to our physical, psychological and emotional needs become acts of rebellion. Taking rest is an act of rebellion. Slowing down and just being is an act of rebellion. Being vulnerable is an act of rebellion. Regenerative cultures and a more environmentally and socially just world are built by reconnecting to and being present with our thoughts, our emotions, our physical sensations.

No, the world is not yet just. Our current patriarchal systems of oppression are not designed to fairly distribute power. They are designed for the already powerful to endlessly grow and accumulate, by further disempowering the voices of those who are already being silenced. On the road towards a better future we need to reclaim our power as citizens, as communities, as nature. Because we are nature protecting itself. And a more socially and environmentally just world is led by the community of life. It is no more led by institutions and corporations and structures, but by bodies and relationships.

Moreover, the transition to a more just world is not about switching seats in the current hierarchical power structures. It is not about ‘us’ knowing better than ‘them’. But about everyone having a voice and the power and freedom to explore what’s better for them – individually and collectively, locally and in global collaboration. And we cannot wait for the current structures of power to give us our voice, we must reclaim it ourselves. We are part of the current systems, and that means that we have an influence on them. Until we choose to act differently, to actively contribute to building the systems we do want, we only reinforce the status quo, the very story that harms us. So we need to keep asking ourselves: what kind of story do we want to contribute to? As Margaret Mead said, “Never doubt that a group of thoughtful, committed citizens can change the world. Indeed, it is the only thing that ever has.”

If what you’ve heard until now sounds idealistic, it’s because it is! But that doesn’t mean it’s not realistic too. Frankly, I can’t tell you how a more regenerative world looks like exactly. Nobody can; nor should they. The possibilities are as infinitely diverse as we are. That’s what I find to be the beauty of it. However, we might already have a clue about what it could feel like. Because I’m sure each of us can recall moments when we felt connected – be it to another person, a dog or a tree –; when we were taken care of or cared for someone else; when we were vulnerable; when we felt safe; when we felt loved. So why not strive for more of that? Why not ty to contribute to a world where that is the norm – for everybody? And in any case, what’s the alternative? Business as usual until extinction? I’d rather have rebellion! I’d rather have radical hope in a more just and regenerative future. And rebel for it!

Yes, I know that change is difficult. And scary. And often really frustrating. I know that we might feel small and misunderstood. And that’s ok. Because let us remember that a more regenerative world is not one of more sacrifice and scarcity, but one of more joy and connection and one that celebrates life. It is one of more love. That’s what we’re rebelling for!