“Pointers, you know, those things that are on clocks and compasses, that just go round and round, and go on and on and do not stop? I am fascinated by things like clocks and compasses; you may wonder why… well, it is because I recognize myself in them. I am not capable of letting go of the circle either. It is a continuous process of falling in deep valleys and climbing high mountains.” This is what ‘Jolene’, one of the women I interviewed about her lifestyle said to me.

Why do so many people say they want to change, but somehow are not succeeding? It is a question that I have wondered for a long time. As I already said in my previous blogpost, change happens outside you, an external trigger, but with every change, you need to make a transition yourself. How is it that those beautiful women I interviewed are motivated to change, but they keep on losing themselves in a cycle? In this blog post, I will tell you more about circular behavior.

People live in a certain way, resulted that they behave in a certain way, which in turn, has its consequence. In this case, we talk about vicious cycles. Vicious cycles are fateful cycles of cause and effect that keep returning to the situation one wanted to leave. Looking at the story of Jolene, I created the cycle which you can see in figure 1. This cycle shows the process of women who want to change. Going from unhealthy eating to a negative self-image, ending up in a deep valley, in which the strength is or has to be found to live healthier again. Their lifestyle changed totally, and as soon as something external happens again, they fall back in the same cycle. 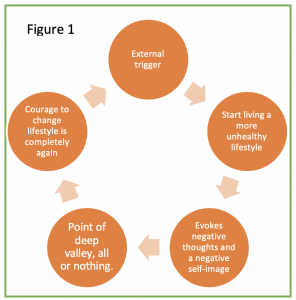 The vicious cycle of anxiety

I believe this cycle is affected by and can relate to the vicious cycle of anxiety because when someone has negative thoughts, self-confidence will deteriorate. Resulted in the growth of negative thoughts and a change that will never work out. The essence of anxiety is worrying about some potential threats. It is trying to cope with a future event that you think will be negative. You do this by paying more attention to possible signs of the potential threat and looking internally to see whether you will be able to cope with that threat or not. When noticing the ‘anxious’ symptoms, you think that you can not cope with the situation, and therefore become more anxious. This is the start of the vicious cycle of anxiety (Government of Western Australia, department of health, 2018). Looking at vicious cycles, it may seem like a never-ending process. Take someone with obesity, for example. In the news, he hears that people with obesity are more vulnerable to cardiovascular diseases. Two days later, he feels pressure and stabs in his chest. He becomes anxious because he is afraid that he has cardiovascular disease. Due to the stress, he starts to eat (emotion eating), and so, the cycle continues. What I ask myself, why is someone starting to ‘emotion eat’, even though he knows the consequences? That brought me to the influence of habits.

The connection to habits

Habits are defined as behaviors that are performed with a minimum of thinking. Every person has good and bad habits. We speak of bad habits when someone is aware that the current habit is adding to possible negative long-term outcomes, so in the earlier mention example: emotion eating. However, that may not affect doing it, because the satisfaction of the direct outcome is overruling. These bad habits have consequences for the longer run. Figure 1 shows that than someone finds the courage again to change, but then when something externally happens, the cycle will repeat (Jager, 2003). That makes me wonder if the link with a certain situation is so strong, that the satisfaction of the performance of the habit wins over the knowledge that it is not good for the long term.

Existence of a habit

The stronger the habit is interlinked in automatic behavior, the more difficult it is to change behavior. This depends on situations, environments, and also the way the habit has formed. When a specific trigger is recognized in an external situation, someone appeals to the bad habit, instead of comparing and elaborating the available options. To change, it is needed to find out where this trigger came from.

Satisfaction of a habit

Besides, knowing how a habit came to its existence, we want to understand how the outcomes relate to the emergence of a habit. Therefore, we have to understand how basic human needs are being satisfied. Habits namely give outcomes that relate to a certain need, which gives satisfaction when performing the habit.  According to the work of Marshall B. Rosenberg and Mandred Max-Neef, nine needs are developed those are; autonomy, meaning, substance, protection, rest, understanding, interdependence, compassion, and play (Wiens, 2010). So, looking at the example of the man with obesity, the bad habit is emotional eating. This satisfies the short term need of sustenance but will lack, for example, in the long term need for rest, because the negative emotion is not solved, but postponed. Or the need for autonomy, the feeling of not having control of your choices, because the solid patterns win from the will to change them.

Now we know, that if we are stuck in a vicious cycle, it is difficult to get out due to the bad habits which are part of the cause of being in the cycle. So, is the habit strongly interlinked to a situation? That satisfaction wins over the known that it is not good for the long term? I think it is, but that it depends on the level of the need which overrules. So yes, external triggers encourage bad habits, but that is to satisfy a certain need.

That makes me wonder if the link with a certain situation is so strong, that the satisfaction of the performance of the habit wins over the knowledge that it is not good for the long term.

Change of a habit

How is it possible to break such a habit/cycle then? Well, the easiest way is to just not allow people to act out the bad habit, for example eliminating all the unhealthy food in supermarkets. However, as you could understand that would be an unrealistic and really expensive solution. So, what then would be a solution? One way to change the habit and break the cycle is to make people remove their current actions related to the bad habit to stimulate other behaviors. For example, by providing positive information for the desired outcomes related to other behaviors, compared with clear information about the negative outcome of the current habit. Another solution could be making the current positive direct outcomes, unsatisfying, which makes the person start thinking in other ways to satisfy the need, to then provide alternative behaviors which also are focused on short-term positive outcomes, the person will try them. These short-term satisfactions then will also roll out into long term satisfaction and a new, but then positive cycle (Jager, 2003).

So, if you want to break the cycle, you need to find out what needs are satisfied by the involved bad habits. To then be able to find alternative behavior to fulfill the needs. This might help to change behavior and to live the desired lifestyle.