The Helpful City of Den Bosch over the Years

From “Bossche bollen” to “Bossche koek”, the city of Den Bosch is the home of many treats that will satiate your hunger for “Brabant” goodness. The capital city of Brabant is more than proud to showcase its cuisine and historical architecture. My time spent here has mostly consisted of gawking over tall, old churches and cute cafes. However, there was more that caught my attention. As time passed, I realised that there is more to this village-like city than meets the eye. A community that never doubts about helping others in need! 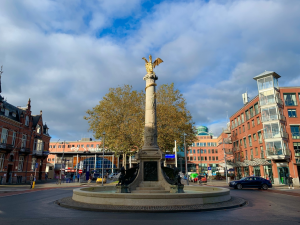 The creation of a city…

The history of Den Bosch begins in 1185 with Duke Hendrik I of Brabant who wanted a settlement city in the north. The city was created by building on sandbanks, where you can find the current market square today. Later, this settlement city was given the name “‘s-Hertogenbosch” (more commonly known as “Den Bosch”), which is derived from: ‘the forest of the Hertog (duke in Dutch)’. The settlement city grew rapidly due to the trade and industry that had arisen there. However, the dukes soon ran out of money because of the many wars they waged. This led to a big rebellion by the people of Den Bosch, which later resulted in the foundation of poor funds in several neighbourhoods. 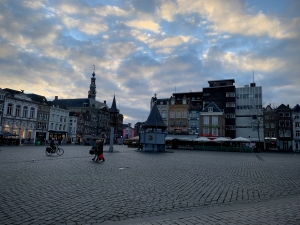 The connection between Den Bosch’ history and poverty

Janny is an experienced city guide in Den Bosch and has been organizing tours through the city for Quiet members since 2019. She hopes to teach residents things about their city by taking a pleasant walk along with well-known and lesser-known locations. I spoke to her about the history of the city and its connection to poverty.

“History repeats itself again and again”

Over the years, the “Geefhuis” (translated to “giving home”) was built, which is now the current library. Similar to a food bank, people here received food and other items from the rich in the city. Religion played a major role in Den Bosch; the more charity you did for others, the higher you rose in heaven. The difference between the rich and the poor (there was no middle class), was maintained to keep the distribution of power small among the rich.

“No matter how great the wealth is, you see people be left out for whatever reason.”

What Quiet does today

It is clear that Den Bosch has a rich history, but what is happening in the present? The culture of ‘giving’ is strongly present among the residents, the capital of Brabant is also very hospitable. This can be seen in the number of (local) sponsors who contribute to the Quiet community and so to its members. Through donations from these sponsors, members can enjoy a day out, a haircut or enjoy a real Bossche bol with a cup of coffee. These are things that people with a smaller budget miss. These donations take shape in either money, (which helps Quiet Den Bosch have a budget for organised trips to the Efteling or access to educational courses) new items, (like clothing, laptops or toys) or coupons to access a service (for example going to the hairdresser or café). 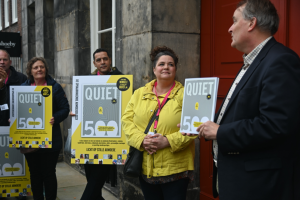 To celebrate the launch of the new Quiet 500 magazine, I organized a local tour with city guide Janny on the 14th of October. Since this took place in the morning, we “woke up” the inhabitants of Den Bosch for silent poverty. Alderman Van Olden and sponsors received the new edition of the Quiet 500 on this day. Together with the city, Quiet is doing everything it can to help people.

Poverty hits closer than we may think

But why is poverty still an issue to begin with? One might think that we learn from our past mistakes and not repeat them. However, 1 out of 5 people in The Netherlands experience money problems. We live in one of the wealthiest countries in the world, yet more than half a million households live in poverty. How?

To understand current events, we must understand the system that allows such things to happen first. Western society is built on capitalistic and liberal values. This means everyone is free to start a business for example. A business will always strive to make a profit, that is its main goal. And to meet that goal, they will look for any way to decrease their cost to maximise profit. However, this often doesn’t happen ethically. Like cheap/illegal labour and tax fraud. A capitalistic society rewards this, in the way that more profit = more success, more freedom, more power.

In a society like this, there is an insane amount of competition. You compete with fellow businesses, or fellow workers, because well, the best worker is picked for the job. This seems logical to us, but this competition motivates a hierarchical system to emerge. It’s hard for people to climb the social ladder, especially those who already experience difficulty due to, for example, their disabilities, (lack of) educational background or coming from a low-income family already. In addition, discrimination can add to this competition, as people with a foreign last name experience less success to be invited to job interviews.

Then how do we transform such a system? I think that by unlearning our old thinking patterns, we can be more aware of what we are doing to ourselves. Identifying that there is a problem is step 1 to “solve” an issue. Sadly, it’s not that easy or appropriate to say we can “solve” an issue that is bigger than ourselves. I think that implementing changes on a smaller more local scale is what can make a bigger change than we may think.

This is how an organisation like Quiet Community comes into the picture. As I mentioned previously, they help locals in poverty by connecting the supply (entrepreneurs) with the demand (the members of Quiet). By doing this, a community can be formed where entrepreneurs offer what they can to those less fortunate. Asset-Based Community Design at its finest!

…But how do we then make sure poverty just doesn’t exist anymore? That an organisation like Quiet is simply not needed? I think that for this to become a new reality, we would have a long way to go. As I mentioned, society is based on hierarchical structures where money determines our place on this social ladder. Perhaps we should get rid of money altogether? For now, I am happy that Quiet is there to help those who need it right now because this old system needs a lot of time and effort to transform.

Whether it is the Bossche bollen, the cultural history or the “gezelligheid” that attracts you to Den Bosch, this city continues to develop in a caring and loving manner. It is no coincidence that an organization like Quiet fits well with the capital of Brabant, given its long history where poverty has always played a big role. Be sure to keep an eye out for the social media of Quiet for future activities!

P.S. I also asked the city guide which places one really should visit:

“Definitely the cathedral (Sint-Janskathedraal), you have to see it. Sailing on the “Binnendieze” is something you should also do!”

P.P.S. if you decide to go eat a Bossche bol, make sure to bring napkins along. 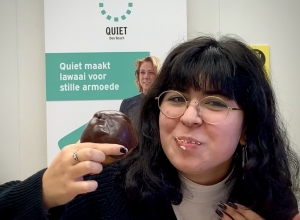 About the Author: Mariam Manukjan

Even though we seem to be more connected than ever in society, there are many instances where a division between people exists. Factors like social class, race, religion and gender all determine how someone is treated in society. As I've always been interested in human behaviour, more specifically the inclusion/exclusion patterns of people, I want to explore how history has influenced society today.

Mariam Manukjan
Even though we seem to be more connected than ever in society, there are many instances where a division between people exists. Factors like social class, race, religion and gender all determine how someone is treated in society. As I've always been interested in human behaviour, more specifically the inclusion/exclusion patterns of people, I want to explore how history has influenced society today.
LinkedInEmail
Close Sliding Bar Area