THE WAY WE CAN CHANGE SYSTEMS

In order to depolarize and create a new system, a new reality, I’m convinced that it is not necessary to fight the opposite poles, but rather to strengthen the (silent) group in the middle. I believe an important aspect is to look for what people really want in a polarized dynamic. It is, without exception, every human being’s desire to be heard. That is why listening to residents is important to be able to articulate the underlying question they have and bring them together around this question. What connects people should be central, not what makes people differ from each other.

“Do what you want”, “I don’t care”, “You choose”, statements that many people sometimes use, including myself. Opinionless people are of no help to you when you have a decision to make. Yet it could be the case that it is precisely this silent middle group that could provide the solution.

Philosopher Bart Brandsma (2017) developed a framework for polarization and how to deal with it. According to him, the mechanism of polarization can be described on the basis of five roles. The pusher is the first roll and is located on one of the two opposite poles of the polarity. The pusher continuously provides fuel for “us-them” thinking, is not interested in dialogue, and is always right, even though facts show the opposite. The joiner chooses one pole or the other under polarization pressure. The joiner reacts to a biological reflex that we all have: in case of imminent danger, whether imaginary or not, we like to have security and we prefer to be surrounded by supporters rather than standing between two fires. Then we have a third group: The silent, the group that in my opinion can make the difference. The silent is a group of people who choose neither side. In other words, they choose not to participate. Among those silent middle group, there can be indifferent people, neutrals as well as people with a great deal of involvement. They are often not accidentally located in the middle; these stakeholders opt for the center based on their nuanced conceptual framework (Brandsma, 2017). 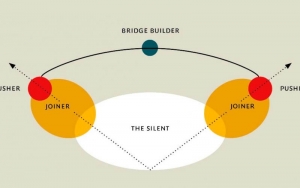 To counter polarization, I believe that we should therefore focus primarily on the silent middle group. As long as they resist the us-them thinking, there is peace somewhere in the society. That is why it is so important to keep strengthening that middle centre. While this middle group is probably more difficult to reach due to their taciturnity, I believe this is precisely the group that may need a boost before they open up. I, therefore, see myself taking on the fourth role to strengthen the silent centre: the bridge builder. The bridge builder is someone who sees shortcomings in the ideas of the opposites and who wants to do something about the polarization by mainly stimulating dialogue. In this, I do not want to act from a rational perspective, but I want to fulfil a new role in the centre. If I, as a bridge builder, manage to make the right connections with the silent middle group, these connections can be sustainable and reliable. I want to focus, among other things, on the underlying common interest and not on the differences of people. This will primarily be about my attitude, tone and involvement, with which I contribute something special to the playing field.

The moment I step into the polarization process as ‘classic’ bridge builder, where the emphasis is on trying to stand above the parties neutrally and objectively, I would sooner end up in the fifth role that Bart Brandsma (2017) describes: scapegoat. You think you can stay out of range, but in fact, you are tolerated by both pushers in your middle position. The scapegoat provides an outlet for the accumulated frustrations, although he often does not realize it himself. This is also a crucial difference between me and my commissioner, the Municipality of Eindhoven. In the classic bridge builder role, which the municipality often takes, you recognize more the management type, who tries to facilitate on rational grounds. The municipality sometimes talks about skills to find the right target groups and topics. It is tempting for an organization to stop there, but I don’t think you are there yet. You also have to enter the difficult area of ​​values ​​and underlying thoughts. And if you have finally managed to bring those underlying values ​​to the surface, you also have to be able to actively maintain them if you want to act the right way.

The main characteristics of the middle group are their invisibility and taciturnity. A taciturn, invisible, or silent majority is something that also characterizes the inhabitants of the Emmasingelkwadrant. There is a group of residents, “the pushers”, who have a clear opinion about the livability in the area and the “foreigners”, which mainly refers to visitors of De Huiskamer. But a larger group of residents stand aloof from the predominant opinions and are not talking about abuses in the area. It is paradoxical that this middle group prefers dialogues as conversation form (Brandsma, 2017). However, it is only those really involved who enter into a dialogue with each other and with their environment; and even they do this only occasionally. Strengthening this middle group in the Emmasingelkwadrant could therefore reduce and perhaps even eliminate the abuses in the area.

I will explain how I envision this based on a model I studied last year. The landscape in the picture symbolizes the bigger picture. The landscape is what you can see and what is happing like trends and developments. If I translate this model to the Emmasingelkwadrant, there is a socio-cultural trend that stands out: polarisation. The older, well-to-do residents in particular think that “the foreigners”, and especially the visitors to De Huiskamer, cause nuisance in the neighbourhood, causing these two groups to oppose each other. The regimes in the picture are the way we have organized the society. The regime explains why things work as they work. In the case of the Emmasingelkwadrant, the current regime is: stereotyping. At the moment, a group of residents predominates that reinforces stereotyping, and there is currently no equally powerful resident group that opposes this. If I want to facilitate this change, changing a system to a different system, it requires a change on value level. That it easier said than done; you cannot easily change someone’s values It requires a deeper change, an impactful and fundamental change, a change that is able to create a new regime. Niches are changes and innovations that can help to transform and create change at the regime level. Niches start with people who think that things at the regime level should be different. However, this comes with changing the interest and ‘the way of doing things’ of the inhabitants (Silvestri, Wittmayer & De Geus, 2020). 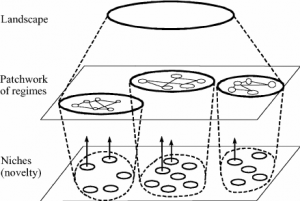 I asked Ger Pepels (2021), expert in Transformative Social Innovation, if I correctly translated the situation I am dealing with into this model. He said to me that when looking at my subject, I am making an interesting translation of theory of this case. Still, he wonders whether this theory is intended for this. He does see the relevance of this approach, but then he also comes across other issues and insights that can be specifically helpful in unraveling this social issue. So the question is: how deep do I want to go into this transformation process? Ger Pepels (2021) said: if this model helps you to get the ‘thinking’ going, it is valuable (G. Pepels, personal communication, May 2021). That is exactly why I chose this model: to start thinking about the deeper layers. At the moment, I am focussing on a transformation at regime level: changing the way in which we have organized a certain situation or system. I am sure I can make a valuable contribution to changing the regime level in the Emmasingelkwadrant. The landscape is a step too far at the moment, however, I do want to zoom out and understand the bigger picture.

I believe that, together with the inhabitants of the Emmasingelkwadrant, I must therefore look for an underlying common interest. The current system in which stereotyping has been generalized can only change when the still taciturn and invisible middle group starts to speak up. I want to facilitate this process by connecting the silent middle group and by stimulating dialogue. This does not mean that it will end up being the midfield against “the pushers”, it means that the midfield will eventually be better able to engage in a conversation with “the pushers”. No discussions, monologues, or debates, but a dialogue or conversation.

In order to depolarize and create a new system, a new reality, I’m convinced that it is not necessary to fight the opposite poles, but rather to strengthen the (silent) group in the middle. I believe an important aspect is to look for what people really want in a polarized dynamic. It is, without exception, every human being’s desire to be heard. That is why listening to residents is important to be able to articulate the underlying question they have and bring them together around this question. What connects people should be central, not what makes people differ from each other.

Now that I know better what my role can be in the depolarization process, it is time to empower the silent middle group. By listening and looking at underlying values ​​and thoughts, being involved, having an open attitude, focusing on the common interest, and stimulating a sustainable connection, a (local) system change is within reach.

About the Author: Amber Klijn

I see myself as a Bridge Builder. The one who brings different perspectives together, changes and combines different realities, and who sees every human being as a unique individual with valuable gifts and contributions.

Amber Klijn
I see myself as a Bridge Builder. The one who brings different perspectives together, changes and combines different realities, and who sees every human being as a unique individual with valuable gifts and contributions.
Close Sliding Bar Area