In my fifth blog, I wrote about environments and organisations where they make use of a different structure, structures with fewer rules and restrictions. I concluded that a structure only works when the participants feel the ownership to act accordingly. It will never work if there is no need for it, people will never feel ownership and the urgency if it does not fit their perspectives. I believe, that at Innovation Square this process is important and that there is not a feeling of ownership yet. Furthermore, I believe that there can be a person who steers this process. That is why this blog will be about the role of this person, it will be about my role at Innovation Square. I am going to link this with theory and projects I did earlier.

When I read all my previous blogs, I had the feeling that there was a need for a personal touch. I write about many theories, link them to different perspectives and look at the societal challenge on a macro level. Nevertheless, I do think it is important to know and clarify what this means for me as a professional and my role at Innovation Square. Therefore, it is nice to look back at some of my previous projects.

During my project for the KNHB, I researched the needs and demands of hockey players with an intellectual disability. The aim of my research was that I wanted to create something with the players instead of for them. The players were most important and central in the entire project. I did this by having conversations, interviews and creative sessions with them. I implemented the results in prototypes and tested them with the target group. I tried to step away from all different perspectives of for example trainers and parents and only listened to what the target group had to say. I build a relationship with them in which I tried them to be open en honest. As the ‘leader’ of this research, I did not influence the outcomes by being open for their perspectives and by being transparent about the process. 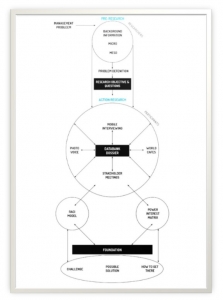 During my project for a neighbourhood in Breda, Emma Pierre and I tried to implement the environment and planning act during the redevelopment of the old Amphia area. Action research was the foundation of his project, which means that the participants were involved from the beginning. Emma and I had to involve all stakeholders with their different perspectives and we created our model to steer this complex project. Because of this model and because of our ‘leadership’ style, we succeeded in bringing different stakeholders together and helped them in the process of listening to and understanding each other.

As a conclusion, I recognise two similarities within both projects. Firstly, I tend to work from the perspective that it is their thing. It is their hockey, their neighbourhood and their project so by using their needs and demands, ownership will occur and results will be long-lasting. Secondly, I am good at bringing people together. I know that there are always different perspectives and I can be the one who brings them together and let them find common ground. This says something about me building relationships, being an empathic listener, open and transparent towards the participants and about me empowering stakeholders. During projects, I constantly ask questions, search for conformations, test outcomes and see if I can link people by having open and transparent conversations. At Innovation Square, I do this by having talks with the inhabitants about what they like and think, try to not do something based on only my thoughts and respond on their needs and demands and observe what this does with the ‘living system’.

In fact, I try to use my professional view and leadership style as written above, while building the living system because I believe all perspectives, needs and demands need to be involved from the beginning. They together have to form a common ground on how to work and structure Innovation Square. I do this by building relationships, empathic listening, being open and transparent and empowering participants. Nevertheless, the process of building a living system at Innovation Square is laborious. I have a hard time activating the inhabitants, there is no ownership feeling and if I do nothing, almost nothing happens. Because of this, I argue my leadership style. Maybe this is not enough? Maybe I need to change? Therefore, I want to research more leadership styles, methods and theories that can be useful for this societal challenge and see how I can use them.

When searching on the internet for community leadership styles I found an interesting article of Mari Martiskainen (2016) called ‘The role of community leadership in the development of grassroots innovations’. According to Martiskainen, a community can be defined by four dimensions: membership (feel that they belong), influence (feel that they can make a difference), reinforcement (it meets their needs) and shared emotional connection (shared interests). Communities can be seen as complex systems which are not only defined by boundaries. Because of this Martikainen argues that community leadership is different from classical leadership. It is less hierarchical, often based on volunteer action, involves the creation of social capital and is acting as a symbolism for change. Community leaders are often informal and non-elected. There is not one concept because the leadership style and structure is defined by the boundaries of the community.

Nevertheless, there is a theory that helps to define community leadership. The Complexity Leadership Theory (CLT) by Keene (2000), has been developed to deal with the complex problems that society face, in a world which is not subjective but results from interactions between people. CLT states that leadership should be seen not only as a position and authority but also as an emergent, interactive and dynamic process. CLT is useful while analysing communities that have fluid organisational structures. It identifies three leadership styles:

Administrative leadership, hierarchical and controlling. Enabling leadership, encourages creative problem solving, learning and adaptability. Adaptive leadership, a dynamic that empowers change. It emerges from interactive change and can be used especially by dealing with problems which require learning, new behaviours and innovations.

The theory is tested by several researchers. Two of those researchers identified seven elements of successful community leadership. (1) leaders were embedded in the formal and informal network; (2) decision making was shared with the community; (3) leaders were operating in an open system, engaging with others; (4) leaders had a vision about the future; (5) leaders had practical management skills; (6) leaders had a planning in place for their potential successors; and (7) leaders had commitment, persistence and energy (Onyx and Leonard, 2011).

When combing all information above, I realise that Innovation Square can change its approach of building the living system a bit. Right now I ‘lead’ Innovation Square based on feelings and emotions, I only use my leadership style. Although, it is useful to use aspects of other leadership styles. They, for example, focuses on structuring the process by having a vision in mind and have a planning with potential successors. This is something I do not myself on purpose. Furthermore, I realise that the participants (inhabitants) of Innovation Square need to be more involved in the decision-making process. In previous blogs, I wrote about ownership and feeling the urgency and I now realise that I have to give the inhabitants more opportunities to act like this. If I involve them in the decision-making process, the chance that they feel ownership becomes bigger.

About the Author: Linn Luijerink

I connect people to deal with a complex issue, by building relationships and finding the common ground. I want to work in the educational domain and see how I can improve the journey of students becoming a professional! Focussing on someone's strengths instead of weaknesses.

Linn Luijerink
I connect people to deal with a complex issue, by building relationships and finding the common ground. I want to work in the educational domain and see how I can improve the journey of students becoming a professional! Focussing on someone's strengths instead of weaknesses.
Close Sliding Bar Area